Experimenting with Focal Points and Illustrating for a Variety of Layouts

By Rebecca
Posted March 23, 2020
In Videos, Works in Progress
Experimenting with Focal Points and Illustrating for a Variety of Layouts2020-03-232020-10-05https://wailingwizard.com/wp-content/uploads/2017/01/wailing-wizard-black-logo.pngWailing Wizard - Art by Rebecca Magarhttps://wailingwizard.com/wp-content/uploads/2017/01/wailing-wizard-black-logo.png200px200px
2

ILLUSTRATING FOR A VARIETY OF DIFFERENT LAYOUTS

Initially, I spent most of my time thinking about how to create a piece of art that would work in a variety of different crops, including vertical, horizontal, square, and even circular and triangular. To ensure the finished art would work in all of these layouts, I lightly drew a bounding boxes (square, rectangular, circular, etc.) that overlapped each other on the same piece of paper. Then I sketched the artwork directly over those boxes, keeping the focal point and important elements safely within the edges of each of those shapes. This ensured the figure and altar would never be cut-off if the art was cropped. Check out all the different shapes that work:

Based on the subject-matter and the star shapes that would be in the altar, I knew that I wanted to create a piece with lots of graphic shapes and symmetry in it (squares, rectangles, circles, stars, etc.). Red is an obvious choice for passion and excitement, but how could I tame those raging, fiery reds and keep the piece provocative … What does it mean to be seduced? It’s intoxicating and dreamy. You can only be seduced when a burning desire is coupled with some hesitation. How does a seducer ease that hesitation? She draws you in slowly and carefully, enchanting you with her confidence and poise.

Posture was everything here. I purposefully broke with the symmetry of the rest of the piece to give her a relaxed, snake-like sway. Her head tilts upward and she pushes her chest forward, beckoning you into the painting and daring you to be seduced. I wanted to paint a woman who was powerful, mature and sexy. She had to be a figure with some height, so I made her quite tall (I believe she is about as many heads tall as a male figure would typically be), and I decided not to shy away from giving her a big pair of (ahem) assets? In fact, I decided to place the focal point directly in the center of her chest, using it as the starting point for the entirety of the rest of the drawing. In this case, all roads lead to cleavage. 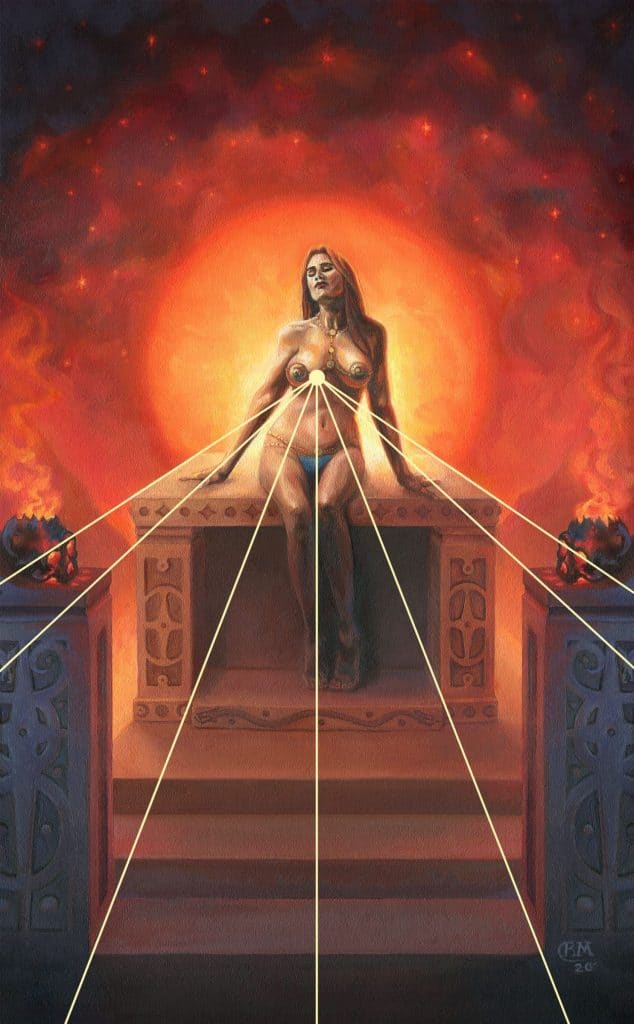 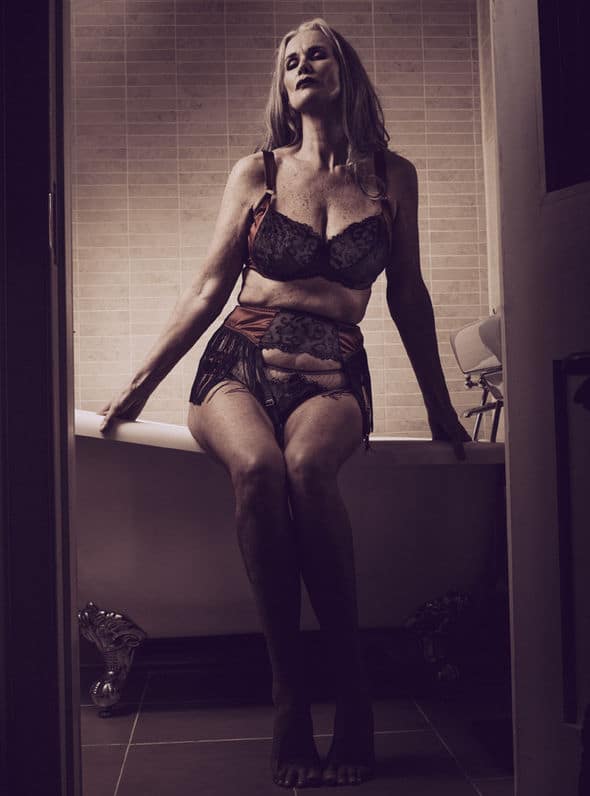 This piece wasn’t without it’s struggles. The initial drawing was created from three different references. The main figure reference I used was a much more mature woman than I ultimately planned on painting, but I liked the vibe she gave off, so I definitely wanted to mimic her posture. I used a handful of paintings by other fantasy artists for skin tone reference. The boobs are an extreme exaggeration over that of the original figure, and I decided to re-position her hands in the drawing. In doing so, I overlooked the size of her hands which where GIGANTIC (Trump would be jealous). Thankfully, my good artist friend (Juan Ruiz) lets me bounce drawings off of him, and his good eyes caught this (and her slightly smallish head) before I proceeded into the painting stage.

I definitely chose to paint it at too small of a size. All of that tight line work in the altar and pillars was extremely difficult to paint and much of it had to be done with tiny little brushes and tiny amounts of paint. If I had to redo this piece, I would double, or even triple the size. I believe doing so would have saved many hours of effort.

I had a pretty clear vision for the lighting upfront, but I didn’t have a very clear vision for the colors that would be found in the middle-ground (specifically the front of the altar and the staircase). As a result I repainted this area several times before I found the right transition from the golds and reds into the cooler blues and purples in the foreground area. I’m not sure if this was something I could have planned for in advance. I think it was one of those trial/error experiences, but I have considered doing digital color mockups in the future. It’s hard to say if these would save more time, but they would certainly save paint.

It feels good to wrap-up this piece. I got to try-out some new techniques, dabble in a more graphic/surreal approach to art, and I learned some things about checking my own work, sizing art appropriately, and planning color. I am really excited to see it on the final Cassettes, CDs, Lathe-Cut Disk, and T-Shirt!

Rebecca
Rebecca has always been inspired by fantastic and imaginative stories with dark themes. In addition to her love of fantasy art, she is actively involved in the underground metal scene as both a visual artist and musician. She has dedicated most of her artistic efforts to illustrating album covers, posters and promotional materials for bands. Her work has also appeared on book covers and on wall graphics for Spirit Halloween stores. Rebecca Magar was born in 1985 in York, Pennsylvania. As a homeschooled child growing up on a rural farm, she had substantial free time to dedicate to her passion for drawing and painting. Though never formally trained in fine arts, Rebecca is employed professionally in the creative field as a graphic designer and web developer. Her understanding of design software and production techniques along with her lifelong affection for fantasy and macabre themes influences her current illustrative work. Rebecca lives with her husband and son in Dallastown, Pennsylvania and has recently taken a break from commissions to begin work on a personal series of illustrative works titled “Seasons of Sacrifice.”
Recommended Posts
Showing 2 comments