It has taken a year and 6 months to finish the High Command artwork and album. My husband and I started writing the music and working on the illustration for this album so long ago that it seems like a distant memory. It has been an active and ongoing project, but given our other obligations it has taken most of our weekends (and most of our free time) to put this together. We have put so much of ourselves into Cultic, and when I listen-to (and look at) the final album, I can hear and see Brian and myself in it. It really is an inspired collaboration that evolved organically between us.

Let’s be clear… Any warm-hearted feelings I have about this project are just that. At its core, Cultic is about power, control, domination, oppression, and all the things we love (dragons, kings, castles, battles and sorcery) … I wouldn’t call it a reflection of our softer side, but it is definitely an extension of ourselves.

This cover art really tells the entire story of the music that will be contained within the album. It is my hope that when we release this album, the sound, lyrics and visuals will all come together to create a complete story (and more importantly that people will get it).

We’ve coined the term “black-death battle punk,” to describe the Cultic sound. You can hear a sample of the music in the speed painting video above. If you’re into it, you can follow us at culticband.com, on Facebook, YouTube, or Bandcamp. Look for the full album to be released this summer. \m/

The Long and Arduous Process of Design

In its infancy, this piece felt weak and uninspired. There were so many points where I considered burning my sketches and the entire project sat on the shelves for an extended period of time while I worked on writing music and my other commissions. It’s somewhat of a miracle that it ever made it to the point of completion, but, I’m glad I ultimately decided to see it through.

This initial sketch felt empty and disjointed. I did have a concrete plan for the color scheme right from the beginning (muted browns, blacks, greens and rust colors). I was sure it would need to use a classic palette because the subject matter is somewhat over-the-top and I didn’t want to lose the seriousness of the piece. Sadly, I wasn’t thrilled with the drawing, so I put it aside for 8 months.

A few months ago (after making immense progress on writing and recording the album) I revisited the drawing. I had planned on tossing it completely and starting over, but Brian convinced me to reconsider. Instead of scratching the piece, I decided to fix it.

I knew it would need to fit into a square format, so I brought the dragon closer to the king and brought the castle in tighter as well. The dragon grew-up in order to dominate the scene, but I still didn’t feel like the piece was badass enough. The dragon was too cute and the whole scene fell dead without weapons, soldiers and activity going on. So, I reworked the dragon and spent a great deal of time doodling the final battle scene.

I knew I needed to plan my light and dark areas to bring the composition together and I knew it needed more depth overall. Adding the characters in the foreground helped to create the illusion of depth I was shooting for, but they also helped to complete the composition through use of lighting and shadows. With the foreground in place, I could envision the shadowed areas encircling the entire piece and creating a vignette with the lighter areas focused behind the dragon and the king. I think this circular motion is what brings all of the elements in the piece together, while the lighter areas help guide your eye to the focal points.

I opted to do an underpainting on this piece because I felt it would be necessary to test my lighting scheme, but also because it gives the painting that continuous, warm undertone that I was aiming for. Ultimately, I painted-out a few things, painted-in a few things, and ended up with the final maelstrom shown below. As with every piece, I’m sure I’ll find things in the future that I wish I could change, but overall, I’m happy with this painting. It took a total of around 80 hours of work to get it to this point, but every second was worth it. I feel like I learned more from this piece than anything I have worked on, and it is so exciting to see the whole Cultic project come together. 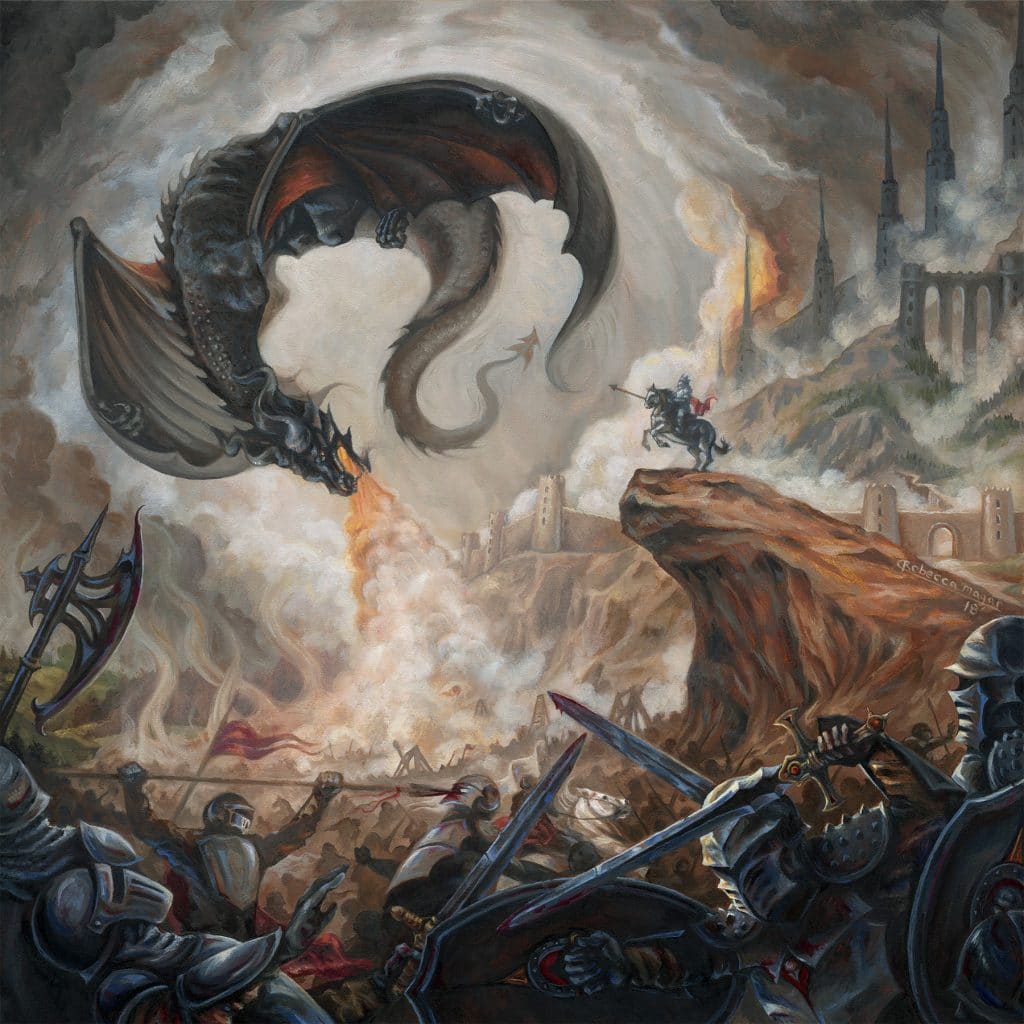 Rebecca
Rebecca has always been inspired by fantastic and imaginative stories with dark themes. In addition to her love of fantasy art, she is actively involved in the underground metal scene as both a visual artist and musician. She has dedicated most of her artistic efforts to illustrating album covers, posters and promotional materials for bands. Her work has also appeared on book covers and on wall graphics for Spirit Halloween stores. Rebecca Magar was born in 1985 in York, Pennsylvania. As a homeschooled child growing up on a rural farm, she had substantial free time to dedicate to her passion for drawing and painting. Though never formally trained in fine arts, Rebecca is employed professionally in the creative field as a graphic designer and web developer. Her understanding of design software and production techniques along with her lifelong affection for fantasy and macabre themes influences her current illustrative work. Rebecca lives with her husband and son in Dallastown, Pennsylvania and has recently taken a break from commissions to begin work on a personal series of illustrative works titled “Seasons of Sacrifice.”
Recommended Posts
Showing 2 comments